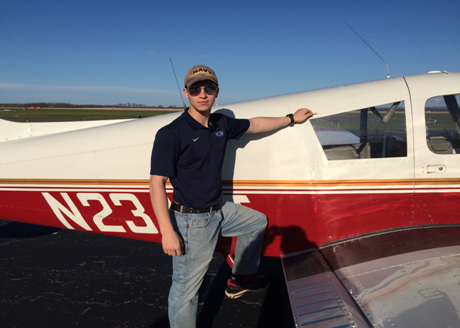 Dale’s son, Zach, graduated from Tyburn Academy of Mary Immaculuate in Auburn on Friday, June 19, 2015. Zach completed his high school swimming career, receiving the MVP award for the Auburn Maroons swim team as well as the David B. Clary award from the Auburn Stingrays swim program. He was a member of the National qualifying Stingray relay team that competed at YMCA Nationals in Greensboro, NC this year. He was Treasurer of the Tyburn Academy National Honor Society and President of the Tyburn Academy Student Government. Zach also received the President’s Award for Academic Excellence, The Hands of Christ Award, and the Cayuga County Vietnam Veterans Citizenship Award.

Zach will attend the University of Dubuque in Dubuque, Iowa, majoring in Aviation Management. He started his flying career at the age of 12, making his first solo flight on his 16th birthday. He has passed the written portion of the pilot’s licensing exam and will be taking the practical flight portion on August 17 and 18. He plans on entering the Platoon Leaders Class (PLC Aviation) in the United States Marine Corps and attending Officers Candidate School (OCS) after graduating from The University of Dubuque. After OCS he will attend Marine Flight School intent on becoming a fighter pilot. Congratulations, Zach, on all your wonderful accomplishments so far!

Buchberger Coerced Out of Retirement to Speak in Vancouver

October 2012 was supposed to be Dr. Buchberger’s final Shoulder Made Simple course in Vancouver,…

On Wednesday, August 12, 2015, Maggie and Dan Whitehouse welcomed a baby girl into their…

Dr. Dale Buchberger was a featured speaker at the Society for Weight Training Injury Specialists…