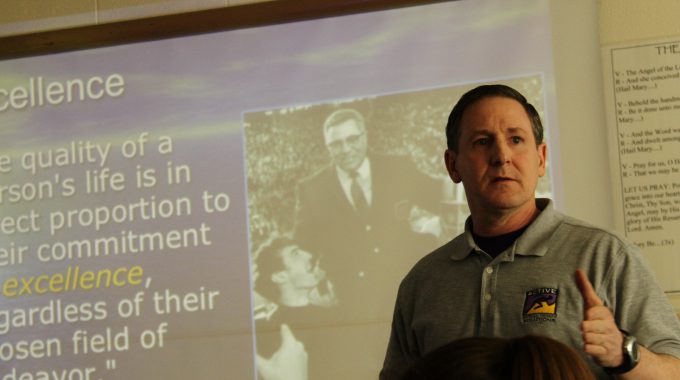 On March 25th, 2014, Dr. Dale J. Buchberger gave a 45-minute talk to the Tyburn Academy Student Body on the topic of Excellence. During his talk Dr. Buchberger quoted noted individuals such as Vince Lombardi and Robert Kennedy. He talked about passion, commitment and sacrifice as pillars of excellence in all facets of life not just athletics. Dr. Buchberger challenged students to be self-critical and to think about their words, “Did you just give an excuse or a solution?”.

He gave examples of outliers of excellence such as the Beatles, Steve Jobs, Bill Gates, Abraham Lincoln, Thomas Edison, etc. These were also examples of individuals that persevered through adversity and tragedy in their lives to ultimately succeed in their chosen endeavors. Dr. Buchberger finished by asking them, “Does your dedication match your expectations?”.

Buchberger Presents on the Biomechanics of the Upper Extremities

Dr. Buchberger presented on Biomechanics of the Upper Extremities for a group of sports chiropractors…