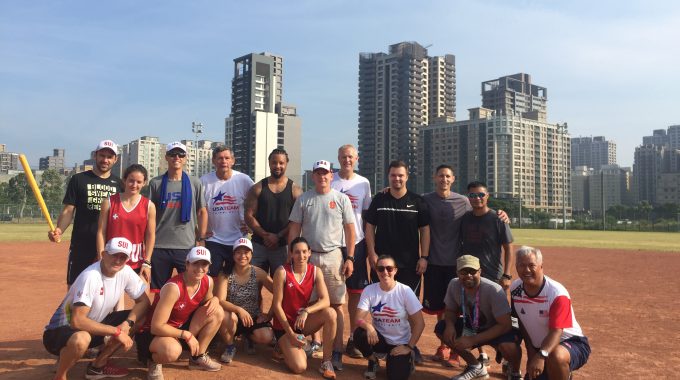 On August 12th, 2017 Dr. Dale J. Buchberger a Chiropractor and Physical Therapist from Auburn, NY left for Taipei, Taiwan with USA Team, to be a member of the USA Summer World University Games (SWUG) Medical Staff.

In short, Lead Team Physician Dr. Ron Olsen stated, “As you were such a critical team member last time, we are hoping you can be part of the team again”. He went on to say, “you were such a perfect mentor/team player, and I hope we can get you to be part of it again”. Dr. Buchberger was also a member of the 2015 team that went to Gwangju, Korea.

Dr. Buchberger said, “The opportunity to march during the opening ceremony, experience the wonderful Taiwanese culture, represent the United States of America, Central New York, Auburn and Syracuse University (Dr. Buchberger is an official Chiropractic Consultant to SU Athletics) is something I am proud to be able to do.” He added, “I had such an unbelievable experience in Korea, having a second chance at this experience is very humbling”.

This years games brought opportunities for Dr. Buchberger to not only work with some of the USA’s best athletes, but to also meet and interact with medical staff members from several countries including Taiwan, Hong Kong, Ireland, Great Britain, Australia, Canada and Brazil to name a few. He also had an opportunity to provide other countries with assistance in treating a few athletes.

These are an Olympic style games made up of the worlds best university level athletes, some of which will be our next Olympians for 2018. With more than 170 countries competing in 22 sports, the World University Games are held every other year and are organized by the International University Sports Federation.  The event is a multi-sport competition open to men and women between the ages of 17 and 27, and who have been, within the past year, a student at a college or university.

Join us in congratulating Dr. Buchberger on being chosen for the honor of serving USA Team in this international event for a second time and welcome home from Taiwan!

Dale’s Experience in Taipei at SWUG Featured on CBS5

From September 16-17, 2017 Dr. Buchberger taught a class entitled “Functional Evaluation and Management of…