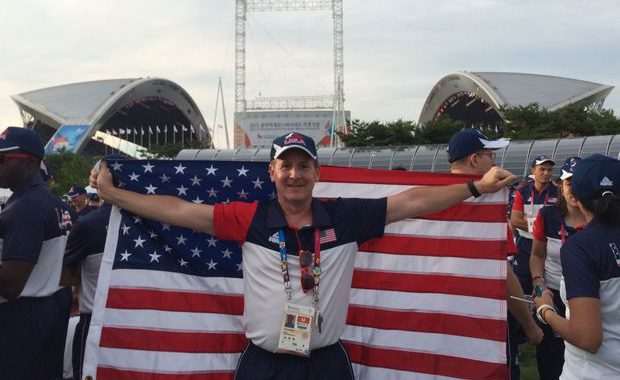 When Dr. Dale Buchberger got the call, he admits he wasn’t sure if he’d go. “I’d never been to Korea, so there’s sort of this fear of the unknown,” Buchberger said. The call was an offer to join a staff of 33 health care providers heading to South Korea for the World University Games. But really, for Buchberger, an Auburn-based licensed chiropractor and physical therapist, the answer was obvious. He was a college athlete whose own dreams of competing in the Olympics were dashed by injury, so he resolved to make it to international competition as a physician. Now, 27 years later, he had the chance.

“It was a big deal for me,” Buchberger said. “Not just for me, but Auburn. People might think ‘Well, I’m from Auburn, I can’t get onto a world stage.’ You can. It just takes hard work.” Buchberger flew out for the World University Games, hosted in Gwangju City, South Korea, on June 28 and worked with athletes over the three-week period that the games took place. He was able to interact and talk to healthcare providers from different countries. Interestingly enough, he found out that not every country has a discipline known as “sports medicine”. He also found that countries like Serbia are excellent at trauma care because of the chronic state of war, but struggle with effective treatment of overuse injuries. It was an excellent opportunity to work with not only some of the best athletes in the USA, but also with some of the best medical providers that are willing to do whatever it takes to help an athlete perform at their best on competition day. Essentially healthcare at the World University Games is the model for great healthcare. It is expedient, efficient and multidisciplinary.

On Wednesday, August 12, 2015, Maggie and Dan Whitehouse welcomed a baby girl into their…

Thank you to everyone who joined us at the Auburn Doubledays game tonight! This was…