Almost 3-years ago I wrote an article for this column regarding the increasing rate of poor posture due to overuse of handheld electronic devices. After writing two articles approximately 2 years apart the message is still not getting through because the number of patients experiencing neck and back pain due to chronic use of handheld devices is increasing. So as a public service I am updating this topic and including research on the effects of chronic smartphone use.

Making it through a meal these days without someone grabbing a cell phone and making a call, sending a text, taking a picture, checking email, looking up something online, or participating in any other electronic errand is all but impossible. Cellphones have become an appendage for most people and there is a constant list of things that “need” tending to online. It has become the addiction of the 21st century. For the millions of smartphone users out there, cutting down on screen time takes more than a conscious effort. Imagine a week without your cellphone. Your response should provide your status about addiction.

Social psychologist Amy Cuddy, a Harvard researcher has assessed how iPosture (hunched- rounded shoulders, head and chin down, with hands close to the body) affects mood, self-perception and behavior. What she found was that after immediately assuming the iPosture subjects are less assertive, display elevated cortisol levels (stress hormone), have a lower threshold for pain, reduced perception of physical strength, and lower self confidence. If you want to read the details of her work I suggest you get her book Presence.

Another psychological aspect to smartphones is their addictive quality. The average smartphone user checks their phone greater than 150 times per day. According to Select International this is because of the concept of variable rewards. This is the psychological ingredient that makes slot machines addictive. You don’t know what the next swipe will generate. Occasionally your action is rewarded by your phone via social media responses, messages, etc. These intermittent rewards are what keep us scrolling and losing track of time and the world around us.

According to Dr. Brain Hammond, “Slumping and hunching over computers and hand-held devices appears to be a contributory factor in the difference in types of back pain between the generations,” He added, “younger people are far more likely to be hunched over a device on a sofa, and would benefit from paying close attention to the basics of good posture.” Fortunately, back pain related to iPosture can be avoided by simply sitting or standing up straight. Etiquette expert Jean Broke-Smith stated, “Although it has been decades since people learned good posture at finishing schools, the time seems right to recognize its potential to help younger people avoid the risk of back pain associated with increasing use of hand-held devices”. The first step is admitting you have a posture problem and the posture problem is the cause of your neck and back pain. The second is correcting it on recognition. The third is minimizing use of the device causing the pain!

Here are a few ways to use your phone smarter, save your back, and preserve your mental health:

Replace smart-phone time with book time. Back in the old days, most people carried a paperback when traveling. Now, instead of opening a book we check out what our Facebook friends had for dinner.

Make of a list of the situations when a smart-phone isn’t a necessity. When cell phones came about, the justification for their existence was their ability to help people in an emergency. Now we are paralyzed without one. Sit down with your family, friends or coworkers and make a list of instances when phones are not necessary, and then leave the devices behind or off. In our house phones are not permitted during any meal involving more than one person. This encourages human interaction and lets the people you are sitting with know that they are more important to you than an electronic device.

Store your device while driving. Cars have become mobile offices. Even if the driver isn’t texting, they usually have the phone close by. Put the phone in the storage compartment before starting the car and don’t touch it until you reach your destination.

Turn the phone off or place it on silent. This simple suggestion will decondition you from the “Pavlov” response of reacting to every sound the phone makes and preventing you from publically displaying your addiction. In addition to turning off the sound and vibration, turn off your alerts. Not seeing the little red alert symbol allows you to check your apps for responses at your conscious choosing instead of as a Pavlovian response to a visual stimulus or a sound. I also recommend reading the new book by Jedediah Bila, #DoNotDisturb for tips on how to escape your smartphone.

These simple tips can prevent you from developing “iPain” before your time! 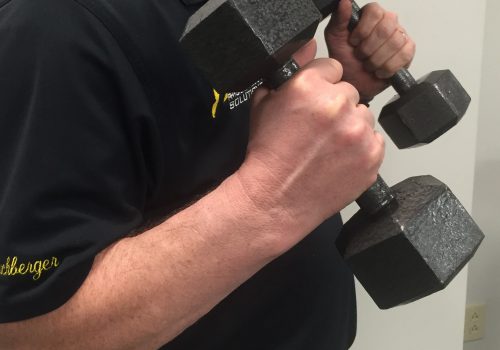 The Human Body’s Response to Trauma

When we are involved in an accident and suffer an injury, we expect to experience pain immediately following the incident. However, sometime down the road…

Not All Cardio Equipment is Safe

Article By: Dale J. Buchberger, PT, DC, CSCS Just because most cardiovascular equipment is low-impact doesn’t mean they it is all injury-proof. There are several…

Strength and Conditioning for Children and Adolescents

By Dr. Dale Buchberger As the competitive fall sports season progresses I am fielding an increased number of questions about the safety of “weight-lifting” for…