Almost 2-years ago I wrote an article for this column regarding the steady rate of poor posture do to overuse of handheld electronic devises. Apparently the message didn’t get through because the number of patients experiencing neck and back pain do to chronic use of handheld devices is increasing. So I am repeating this article with some updates as a public service.

Making it through a meal these days without someone grabbing a cell phone and making a call, sending a text, taking a picture, checking email, looking up something online, or participating in any other electronic errand is all but impossible. Cell phones have become an appendage for most people and there is a constant list of things that “need” tending to online. It has become the addiction of the 21st century. For the millions of smart phone users out there, cutting down on screen time takes more than a conscious effort. Imagine a week without your cellphone. Your response should provide your status about addiction.

A survey of 3,000 adults in the United Kingdom reported 84 percent of 18- 24-year-olds reported experiencing back pain in the past 12 months. The average number of working days the group lost to back pain was 1.5 days more than their parents’ generation and higher than any other age group. Researchers said people from almost all age groups spend just as much time in front of a screen as they do, sleeping. The difference between age groups seems to come from how they behave in front of the screen, according to the study. Two thirds of 18- 24 year olds admitted to slouching in front of their computers at work and half said they repeat the behavior at home. Researchers said 45- 54 year olds were twice as likely to report sitting up straight in front of the screen.

According to Dr. Brain Hammond, “Slumping and hunching over computers and hand-held devices appears to be a contributory factor in the difference in types of back pain between the generations,” He added, “Younger people are far more likely to be hunched over a device on a sofa, and would benefit from paying close attention to the basics of good posture.” Fortunately, back pain related to iPosture can be avoided by simply sitting or standing up straight. Etiquette and deportment expert Jean Broke-Smith stated, “Although it has been decades since people learned good posture at finishing schools, the time seems right to recognize its potential to help younger people avoid the risk of back pain associated with increasing use of hand-held devices”. The first step is admitting you have a posture problem and the posture problem is the cause of your neck and back pain. The second is correcting it on recognition. The third is minimizing use of the device causing the pain!

Here are four ways to limit cell phone use and save your back: Replace smart-phone time with book time. Back in the old days, most people carried a paperback when traveling. Now, instead of opening a book we read the top five reasons Miley Cyrus has lost her mind, or we check out what our Facebook friends ordered at Starbucks.

Make of a list of the situations when a smart-phone isn’t a necessity. When cell phones came about, the justification for their existence was found in their ability to help people in an emergency. Now we are paralyzed without one. Sit down with your family, friends or coworkers and make a list of places where phones are not necessary, and then leave the devices behind or off. In our house phones are not permitted during any meal involving more than one person. This encourages actual human communication and lets the people you are sharing a meal with know that they are more important to you than an electronic device. If the person on the other end of the smart phone is more important you should be having dinner with them.

Store your device while driving. Cars have become mobile offices. Even if the driver isn’t texting, they usually have the phone close by. Put the phone in the storage compartment before starting the car and don’t touch it until you reach your destination. The new rallying cry against texting while driving states “it can wait”. This should include all other smart phone distractions, including but not limited to: checking social media that in 2013 resulted in the vehicular death of three children.

Turn the phone off or place it on silent. This simple suggestion will decondition you from the “Pavlov” response of reacting to every sound the phone makes and preventing you from publically displaying your addiction.

These simple tips can prevent you from developing “iPain” before your time!

There is no better physical training for skiing, than skiing itself.  Generally speaking, most skiers participate in the sport for just a few weeks during…

By: Dale J. Buchberger, PT, DC, CSCS The recent stretch of beautiful weather is getting all of us eager to exercise and/or work in the… 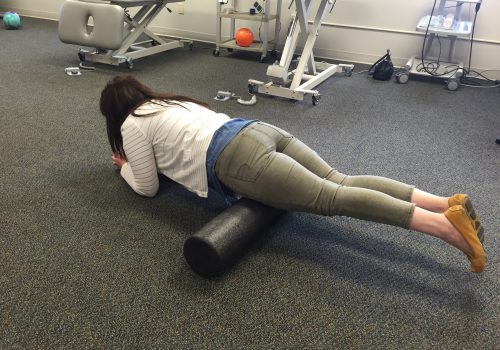 What is Foam Rolling/Self-Myofascial Release

Do’s and Don’ts of of Weight Training

Article By: Dale J. Buchberger, PT, DC, CSCS, ACBSP The warm and sunny weather thaws the muscles and joints from the winter stiffness. It also…