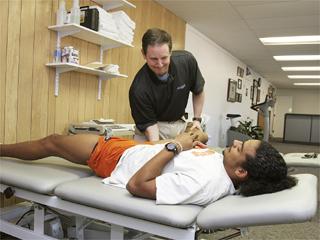 Physical therapist and chiropractor Dr. Dale Buchberger uses active release techniques on Ramon Sosa Jr. for a hamstring sprain at his Auburn based Active Physical Therapy Solutions office on Tuesday afternoon. Buchberger was named the 2009 sports chiropractor of the year by the American Chiropractic Board of Sports Physicians for his work with professional athletes like Sosa, who hurdled for Syracuse University and is now on the Dominican Republic’s national team. Photo by Chet Susslin/The Citizen

People and cars have a lot in common. Or at least you might believe they do after talking with Dale Buchberger. A local physical therapist with a background in the chiropractic field, Buchberger can draw a quick comparison between the two. For instance, during a recent interview, he compared sports doctors at a college or professional level to mechanics in high-performance auto racing. They are on the cutting edge, though their techniques aren’t readily available to all people or drivers.

“There are advances that come out of auto racing that trickled down, and you benefited from them,” said Buchberger, who recently opened Active Physical Therapy Solutions in Auburn.

“It’s the same with stabilization of shoulders (in sports), or other procedures,” he said.

Buchberger would know. He works with a variety of clients, from young children to elite athletes.

He was also named sports chiropractor of the year last month by the American Chiropractic Board of Sports Physicians for the work he has done over the years.

Though he works in physical therapy, Buchberger has an extensive history as a chiropractor that includes both practice and teaching. He said he often draws from both fields as he works with different people.

The knowledge gives him an advantage, he said, because he is able to combine the diagnostic techniques of the chiropractic field and the rehabilitative techniques of physical therapy.

Along with his private practice, Buchberger has worked in strength, conditioning and injuries with Syracuse University athletics, the Auburn Doubledays and the Syracuse Chiefs baseball team. This is his first season working with the Stingrays swim team.

He is also an experienced speaker, and give seminars on shoulder, wrist and other injuries.

Buchberger said working with athletes and non-athletes can be different but similar, at the same time. He again used a car analogy to compare the two.

A Syracuse track athlete or a AAA baseball pitcher would be like a Ferrari, which is high maintenance. Mr. or Mrs. Smith, the average patient, is more like a Ford truck, needing some maintenance, but able to go longer without work.

“They both need a screwdriver and a socket wrench, but the difference is how much they need it,” Buchberger said.

The auto comparisons don’t come out of thin air. Buchberger said he draws a lot of inspiration in his daily life from his father, who passed away in January.

He attributes his national award to the drive he learned from his father, who learned to be an auto mechanic with little education and was able to provide for a family and put his kids through school.

“If that’s not drive, I don’t know what is,” Buchberger said.

What’s the Best Home Exercise Equipment for You?

By: Dr. Dale J. Buchberger As the weather improves many of us start to think of exercising to shed the winter pounds. A question that…

Why Sitting is Killing You

Article By: Dale J. Buchberger, PT, DC, CSCS, DACBSP Modern conveniences, technologies, chairs, remotes, are designed to make our life easier but all of them…

By: Dale Buchberger, PT, DC, CSCS, DACBSP Almost 2-years ago I wrote an article for this column regarding the steady rate of poor posture do…

How physical therapy can help seniors

Article By: Dale J. Buchberger, PT, DC, CSCS, DACBSP Physical therapy not only helps individuals recover from an injury or accident, it can help control…